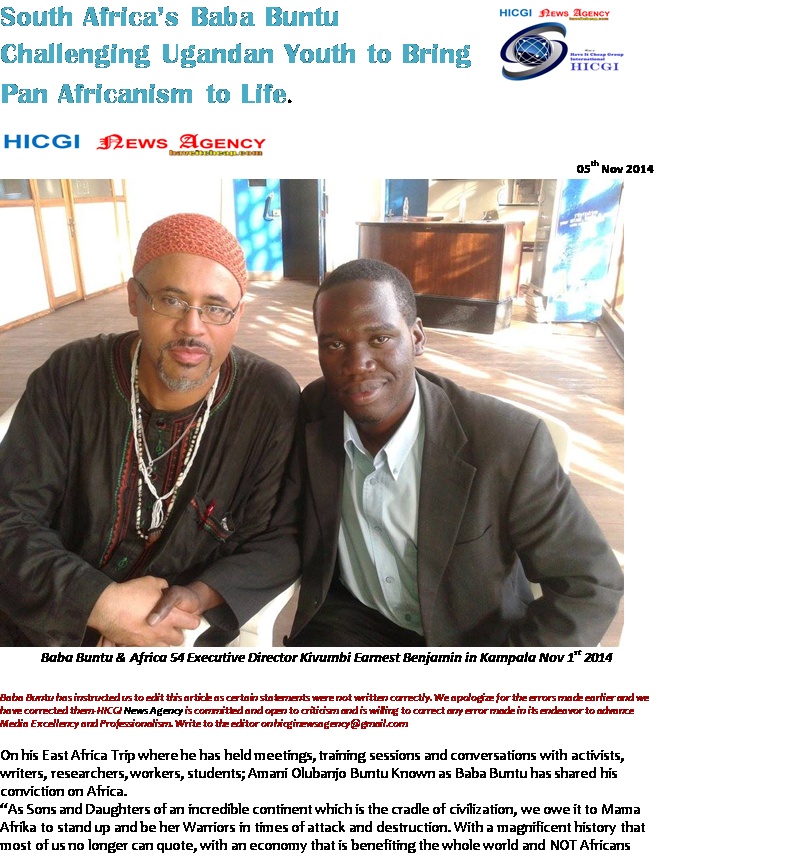 On his East Africa Trip where he has held meetings, training sessions and conversations with activists, writers, researchers, workers, students; Amani Olubanjo Buntu Known as Baba Buntu has shared his conviction on Africa.

“As Sons and Daughters of an incredible continent which is the cradle of civilization, we owe it to Mama Afrika to stand up and be her Warriors in times of attack and destruction. With a magnificent history that most of us no longer can quote, with an economy that is benefiting the whole world and NOT Africans and walking into the future with no other plan than to blindly follow those who say they want to “help” Africa – we have surely become our own worst enemy.” He says

Baba Buntu adds, It is time for us all to position the rebuilding process of Africa at our individual and collective center. We need to WILL Africa’s empowerment. It will not happen by itself. And none else can empower Africa for us.  Baba Bantu adds “My life continues to be a devotion to African Youth, as YOU are the ones who can make the necessary step into the Halls of True Liberation. Let us embrace our youth, guide them and expect a LOT from them. If we know our history very well, the challenges we face should never install fear in us – we have done miracles in the past, and will do them again. ”

Buntu has had fruitful and inspiring conversations with youth on African politics, philosophy and social change.  He touches on many subjects, among them: Black Consciousness, White Supremacy, African Centered Lifestyle, African Spirituality, Indigenous Knowledge & Pan Africanism.

This comes at a time where Kivumbi Earnest Benjamin the Founder & Executive Director of Africa 54 a Non-Profit Organisation looking at the unification and empowering of Africa is calling for AFRICA 54 Summit in Kampala. Africa 54 has invited Heads of State from 54 African countries to meet for three days and review as well as reclaim the dreams of African strong icons like Haile Selassie, Ahmed Sekou Toure, Kwame Nkrumah, Yoweri Kaguta Museveni & Muammar Gaddafi as well as grassroots other advocates like Marcus Garvey, Malcolm X, academics such as W. E. B. Du Bois, and others in the diaspora.

There were voices and concerns during one of the session that since President Museveni is the current chairman of Pan Africa Congress (PAC) he should champion for next conference that will see Pan Africanism rise than never before-Kivumbi instigated.

The First Pan-African Conference was held in London from 23 to 25 July 1900 (just prior to the Paris Exhibition of 1900 “in order to allow tourists of African descent to attend both events”). Organized primarily by the Trinidadian barrister Henry Sylvester Williams it took place in Westminster Hall and was attended by 37 delegates and about 10 other participants and observers from Africa, the West Indies, the US and the UK, including Samuel Coleridge Taylor (the youngest delegate), John Alcindor, Dadabhai Naoroji, John Archer, Henry Francis Downing, and W. E. B. Du Bois, with Bishop Alexander Walters of the AME Zion Church taking the chair. Du Bois played a leading role, drafting a letter (“Address to the Nations of the World”) to European leaders appealing to them to struggle against racism, to grant colonies in Africa and the West Indies the right to self-government and demanding political and other rights for African Americans.

Baba Buntu in his remarks has expressed his presence in Kampala like this;

“Yesterday I was reminded of True Hip-Hop. Why I fell in love with it. What it beautifully used to be. And what it disgustingly seems to have become. Remembering when Hip-Hop was fully Black and had no need to excuse itself. BABALUKU and his BAVUBUKA DYNASTY in Namasuba, Kampala, is a Conscious Knock-Out residence of Hip-Hop as Life. Not performance. Never acting; completely swag-free. They have set up a family house for young boom-bap’ers of teaching, sharing, growing and expanding the Afrikan Self. Setting it free to unlimit itself.

I was ritually welcomed with a fire storm of familiarity. In languages I don’t speak. Yet understood every word of Emcees busted rhymes in Gwere, free-styled in Luganda, kicked it in Nkole and battled up in Karamojong. English was unspoken, and Bronx was called to order – as a destination in which Hip Hop once revealed a new self, NOT its’ birth place.

Through vibes and riddims and beats and head-bops, verbal exchanges of knowledge were let lose. Creativity infused the new order. Experience arrested the limitations of enslaved intellectualism, Ancient bass drums. Indigenous funk, Healing of fire through spiritual microphones, connected to earphones of Ancestral speed-dials. Whopping the conversation into a frenzy of pride, self-embrace and the possibility of Afrikan Unity. Griots of young, fearless, Black militancy. Without a political agenda, and yet ultra-political in its demand for change. And super-revolutionary in its commitment to carry out that change.

Spirits of grounded voodoo were awoken. Possessing me to revisit the place of Rhyme and Reason. The Grandmaster truly flashed yesterday. My head is still spinning… 7 x 78rpm….”

Baba Buntu is a true representation of Pan Africanism, from his dress code-(African only) to his home in Johannesburg.

Who is Baba Buntu? 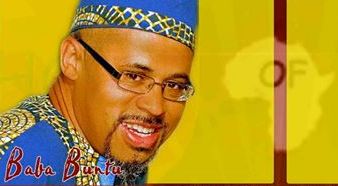 Baba Buntu (Amani Olubanjo Buntu) is a consultant, lecturer, practitioner and writer focusing primarily on education, leadership training, social development and community empowerment. He is Founder and Executive Director of Ebukhosini Solutions, a community-based consultancy company in Johannesburg. He is also a founder of The R.I.S.E. Project (artist development), Afuraka (cultural community development) and SHABAKA – Men of Afrika (men’s programme).

Having background from Anguilla in the Eastern Caribbean, Baba Buntu grew up in Norway, where he after a course in Global Development Studies obtained a B.A. in Social Work and pursued a post-graduate course in Group Methodology. In 2000 Baba Buntu repatriated to South Africa and now lives in Johannesburg. He holds a Master Degree in Philosophy of Education from UNISA (the dissertation received a distinction and a Council Award for highest performing research paper) and is currently a Doctoral Candidate within the same discipline.

Baba Buntu has worked within the youth and community field, with special focus on preventative methods, for the past 25 years. He has inter- and trans-disciplinary experience working with questions related to leadership, organizational development, African history, Indigenous Knowledge Systems (IKS), philosophy of education, self-development and youth- and community empowerment. He has founded several projects and has been engaged as lecturer, consultant, coordinator, writer and advisor in many forums. He mentors young, emerging leaders and has designed train-the-trainer programs for young entrepreneurs. Baba Buntu also hosts a number of monthly community programs throughout Gauteng province.

Over the years Baba Buntu has had several international working engagements and has traveled extensively in Africa, the Caribbean and Europe. His international engagements have afforded him elaborate experience within the dynamics of international politics and cultural development. Buntu has carried out work on request by United Nations, UNESCO, NEPAD, The South African Department of Education / Department of Arts and Culture, City of Johannesburg, Kara Heritage Institute of Afrikology, Hope Worldwide/Olive Foundation, Africa Institute of South Africa (AISA), FK Norway (Peace Corps) and many more. With firm commitment to youth empowerment he has provided supervision for many community structures, such as Play for Peace, S. T. Leadership Development Initiatives and Siyaphambili Youth Pioneers.

With his involvement in projects focusing on international politics, cultural knowledge, work against xenophobia, prevention of violence, men’s programs and youth development, Baba Buntu has featured in South African media platforms; radio, TV and newspapers. His essays are included in academic journals and anthologies published in South Africa, Namibia, Eritrea, Nigeria and Norway. He has ongoing engagements as a writer, motivational speaker, workshop facilitator, counselor, researcher and music producer in South Africa and internationally. 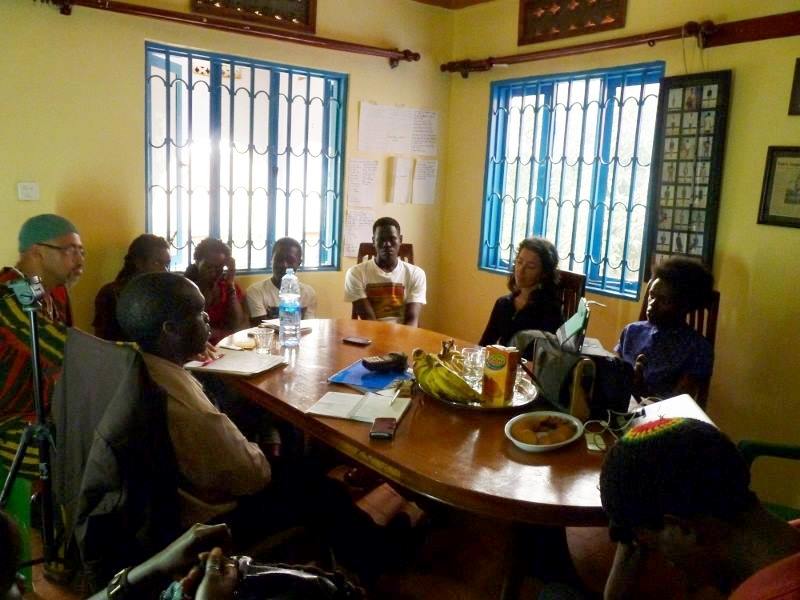 HICGI News Agency has learnt that Baba Buntu might regularly come to Uganda on this agenda of Pan African spirit and we shall continue to give you every update on this story.