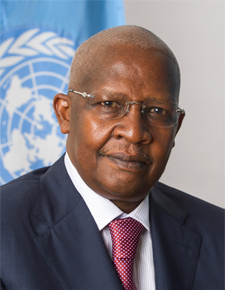 Kivumbi whose placard had not been seen by the security at the entrance has been lifted moments after U.N Boss started his speech. It has been hard for him to be dragged away probably because he has been standing next to diplomats and foreign dignitaries as both local and International journalists turned there camera on him which would be a bad image for Uganda on Human Rights & Freedom of Expression. After along time of puzzle, the security resorted to asking him to drop it down and wait for New Vision Boss Robert Kabushenga who has been the Master of Ceremony toto give him chance to speak which he hasn’t not risking making things more berserk had he gotten chance to pur anguish on U.N handling of Bokoharam question in Nigeria. Immediately after the lecture to avoid b arrest, Kivumbi covered his purple kitengi attire with a black jacket, went and shook hands with security Minister Hon Muruli Mukasa who has represent the Vice President H.E Edward Kiwanuka Sekandi and then disappeared in the crowd. In an exclusive interview with the Daily Monitor Journalist who questioned Kivumbi’s NRM Cardership especially some times acting controversial like recently criticized the Police brutality against WBS Journalist while covering a story at Old Kampala Police Station; Kivumbi has said that pointing out a wrong done is what will save NRM from collapsing and he added MZEE President Museveni loves brilliant young people like him. This is not the first time Kivumbi demonstrates.

Uganda Vs Kivumbi Ernest Benjamin & 2 others

In 2010, Government battled Kivumbi and 2 other People’s Development Party-PDP officials who included Peter Clever Birimuye & Steven Muwulya at Buganda Road Magistrates Court for 8 months following Kivumbi’s unauthorized demo at Parliament protesting what he called missing using State House by hosting party issues. This was at the time he was in opposition before meeting President Museveni in Jan 2011. Kivumbi bythen PDP Deputy Spekes and EX National Coordinator had been locked down at Central Police Station for 3 days until Dr. Abed Bwanika sent Lawyers to him and other officials to get them out. See case here https://presidentkivumbi.wordpress.com/2010/04/17/uganda-vs-kivumbi-ernest-benjamin-2-others/

Equally so in July 2013, Kivumbi was interrogated for 7 hours by the Criminal Intelligence Department-CID at Parliament when he was reprimanded from Deputy Speakers office Hon Olanya who he was petitioning to grunt Asylum to United States fugitive and whistle Brower Edward Snowden. Security and intelligence quizzed Kivumbi for his connection with Snowden but latter in the night was released without being charged. See Channel 44 News Video on Kivumbi here https://www.youtube.com/watch?v=27PfZ8TROc0 Will Princess Scovia Kivumbi bear with Kivumbi Political Career? This is the question that has been put on him, but Kivumbi says Scovia 20 years believes in Kivumbi’s dreams just like Janet Museveni believed in her husband who is now President for 30 years. Kivumbi is Scovia’s no 1 celebrity and fan and she’s behind him. Theie wedding took place on 14th Dec 2014, see pictorial and story here in The Sunrise News Paper https://hicginewsagency.wordpress.com/2015/01/17/the-sunrise-news-paper-full-colour-page-pictorial-on-earnest-benjamin-princess-scovia-kivumbi-introduction-wedding/ Story  also here https://drive.google.com/file/d/0B5GyiV7-IUc3NmJ2eWo3UzVLRU0/view

Kivumbi Back from Soroti

In a related story Kivumbi this afternoon has arrived safely from Soroti where he has been away for 3 days on National Resistance Movement-NRM Liberation Celebrations of 29 years. He has been received by Princess Scovia Kivumbi, Brian Ssenkungu & a Ugandan Journalist. See Kivumbi’s stay in Soroti here https://hicginewsagency.wordpress.com/2015/01/26/kivumbi-joins-museveni-for-nrm-29-aniversary-in-soroti/