Trump’s continuous fight to retain presidency is what hinders big powers from congratulating Democrat Joe Biden in efforts of exhausting all avenues. Sources to White House also indicate if he loses legal grounds he must return to Americans to ask for Presidency in 2024.

In an email to his supporters 2 hours ago (8:09pm EAT Tue 10 Nov 2020), He assures-Trump Pence Make America Great Again. “Despite the Left’s attempts to undermine this Election, I will NEVER stop fighting for YOU.

My Administration is achieving things no one thought possible – the stock market is up BIG, the coronavirus vaccine is underway and will be completed safely very soon. We are accomplishing so much, which is even more reason to step up and DEFEND THE ELECTION! We cannot let the Democrats STEAL this Election from your all-time favorite President. They’ll DESTROY everything we’ve worked so hard for. I’m calling on YOU to FIGHT BACK.. part of Trump message read.

International Political Analysts who have spoken to HICGI News Agency reveal that such rigorous Trump fight joined by several American supporters and scores of Republican Senators led by Senate Majority Leader Mitch McConnell are part of the reasons for super powers to be silent on Biden Election status.

Here are some key international figures who have not sent messages of support or who have appeared lukewarm in their congratulations.

Some have gone even further, congratulating Mr Trump or backing unsubstantiated claims he has made about voter fraud. At least one minister has paid for his remarks with his job.

Mr Jansa has made no secret of his support for Mr Trump, even tweeting his congratulations to the incumbent president on Wednesday, long before the vote counts were anywhere near completion.

Since then he has repeated allegations of voter fraud carried out by Democrats.

On Saturday, he appeared more conciliatory, describing the US as Slovenia’s strategic partner and said that friendly relations would remain whoever was president.

But he has still not offered any congratulations to Mr Biden.

Mr Jansa, from the far-right anti-immigration Slovenian Democratic Party, is an ally of Hungarian Prime Minister Viktor Orban, who has also expressed support for Mr Trump in the past.

Other Slovenian leaders, including President Borut Pahor, have congratulated Mr Biden, as has Mr Orban.

Mr Helme announced his resignation on Monday after he and his son, Finance Minister Martin Helme, made allegations about widespread fraud in the US election on a radio talk show on Sunday.

His son said that “all normal people should speak up” about the alleged falsifications.

“There is no point in talking about any kind of democracy or the rule of law if elections can be so rudely, so blatantly and massively rigged,” he added.

Both are members of the far-right Conservative People’s Party, of which Mr Helme junior is also the leader. The party is in a coalition with the Centre Party and another right-wing party,

But he stopped short of sacking them, critics argue, because he relies on their party’s support to stay in power.

Mr Helme senior said he was resigning because of the “slander” he was facing in the Estonian media.

Mr Bolsonaro is often considered to be an ally of Mr Trump, so much so that he has been described as the “Trump of the Tropics”.

The Brazilian leader’s failure so far to congratulate Mr Biden, therefore, comes as no surprise.

He has crossed swords with the former vice-president in the past, describing his call during an election debate for the US to push Brazil to protect the Amazon rainforest better as “disastrous and unnecessary”.

Bolsonaro and his children — who, like Trump’s, play an active role in politics — had been hopeful about Trump’s re-election bid. His son, Congressman Eduardo Bolsonaro,  questioned Biden’s votes and the integrity of the US election on Twitter last week.

Mr López Obrador is another Latin American leader who has tried to maintain good relations with Mr Trump, despite tensions over the US president’s hardline policy on migrants and in particular his pledge to build a wall along the two countries’ border.

Mexican President Andrés Manuel López Obrador made a carefully worded statement on the US election in which he did not address Biden as the winner and instead said he needed to wait until legal challenges to the vote-counting concluded.”We are going to wait for all the legal issues to be resolved. We do not want to be reckless. We do not want to act lightly. We want to be respectful of the self-determination of the people and of their rights,” López Obrador said on state television Saturday. 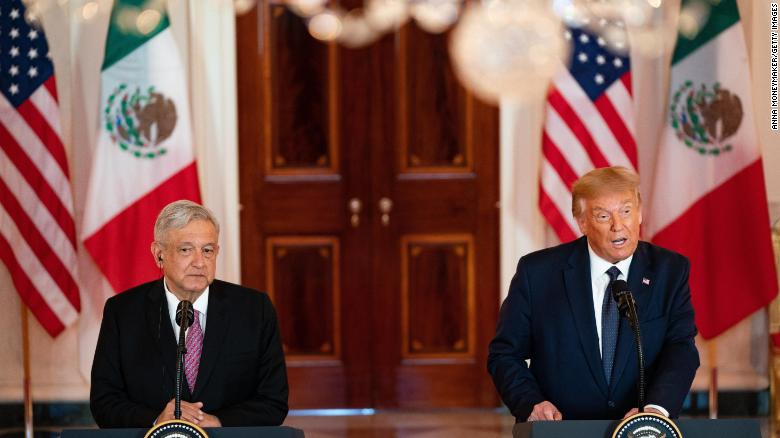 Trump and López Obrador address the media at the White House in July.

Mr Netanyahu is another world leader who has never hidden his affinity for Mr Trump.

“I would like to open with greetings to Joe Biden and Kamala Harris. For almost 40 years I have had a personal, long and warm relationship with Joe Biden and I know him as a big friend of the state of Israel,” he said in a video statement.

Mr Netanyahu concluded the message by paying tribute to Mr Trump for his friendship towards Israel and him personally, and thanking him for recognising Jerusalem as Israel’s capital, overturning decades of US policy, and for his hardline stance on Iran.

The Saudi crown prince has congratulated Mr Biden on his election victory – but only on Sunday, 24 hours after the news broke. Other Middle Eastern leaders responded on Saturday.

It was pointed out that Mohammed bin Salman had wasted no time in congratulating Tanzanian President John Magufuli on his re-election that day.

Mr Biden has vowed to reassess relations with Saudi Arabia, in particular over the killing of Saudi journalist Jamal Khashoggi and the civil war in Yemen.

President Xi sent congratulations to Mr Trump in 2016 the day after his poll victory.

But this time China has so far held off on giving any reaction to the US election results.

Foreign Ministry spokesman Wang Wenbin noted Mr Biden’s declaration of victory in a briefing on Monday, but said Beijing would watch while “US law and procedures” were followed.

Mr Biden is expected to be more measured and nuanced in his approach to China while maintaining a tough stance.

There has been no response to the election result from Mr Kim, indeed as of Monday morning North Korean state media outlets have been silent on the US elections.

However, no mention was made of Donald Trump’s 2016 victory until two days after his election.

Mr Trump and Mr Kim have had a stormy relationship, though they have maintained contact through three historical face-to-face meetings.

Mr Biden, though, has described Mr Kim as a thug and says he is not interested in any personal diplomacy with him. The North Korean leader has called Mr Biden “a fool of low IQ”.

Turkish President Recep Tayyip Erdoğan  had refused to congratulate Biden but a few hours ago he has.

What he’s saying: “I reiterate our determination to work closely with the U.S. Administration in this direction in the upcoming period, and I believe that the strong cooperation and alliance between our countries will continue to contribute to world peace in the future as it has been until today,” Erdoğan said in a statement. 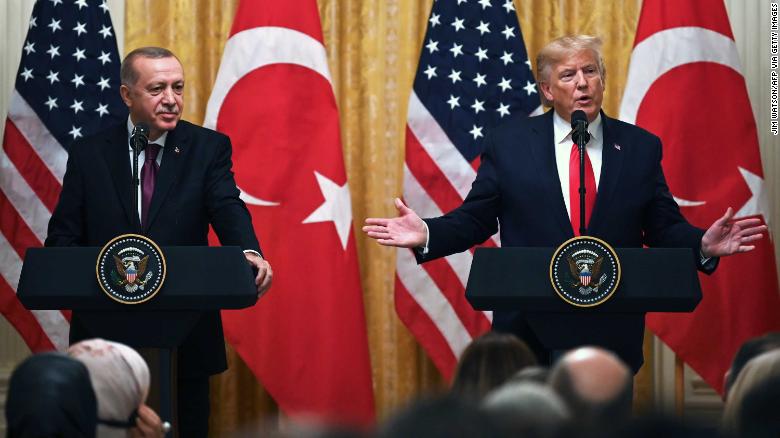 Trump and Erdogan take part in a joint press conference at the White House in 2019.Speaking last year on a special episode of The New York Times’ “The Weekly,” Biden said he was “worried” about Turkey and would be taking “a very different approach” to relations with the country, including supporting opposition leadership and the Kurds.

Trump’s retreat from the region — including a sudden withdrawal from Syria that left erstwhile anti-ISIS allies the Syrian Kurds exposed to a Turkish advance — emboldened Erdogan.