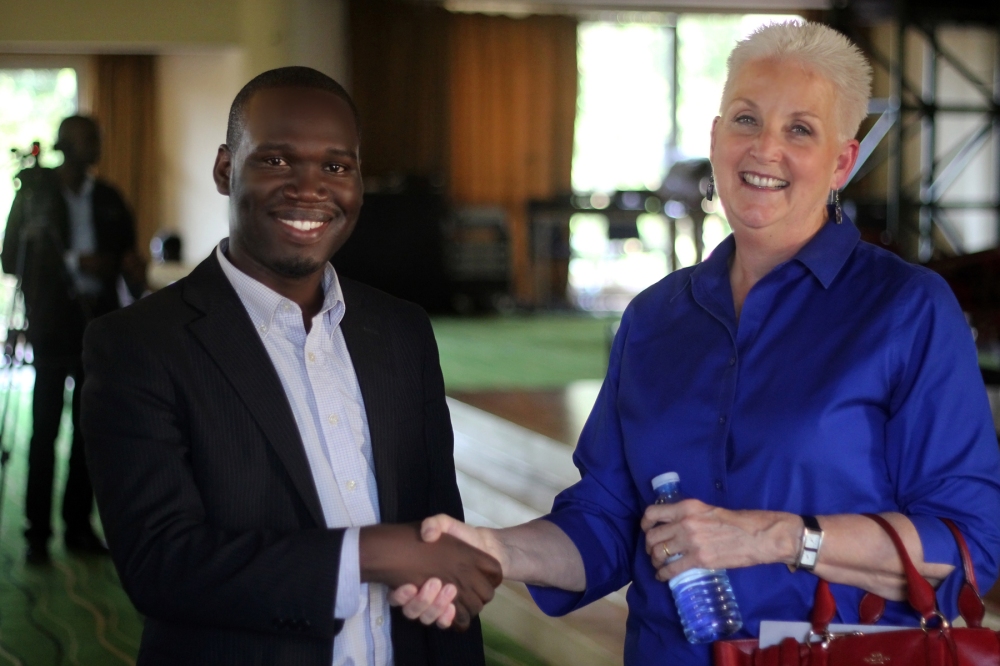 The Ambassador of the most powerful nation Her Excellency Deborah R Malac (pictured above) in Uganda has met young politician Kivumbi Earnest Benjamin the President General of Heal The Planet Global Organisation-HTP & CEO of Have It Cheap Group International.

Sources indicate that Kivumbi is on spotlight by key United States Agencies including CIA as a potential visionary young man to take on mantle of a continent whose ties with the West remain crucial and of much interest at a time China is on peremptory.

Unlike China whose policy in Africa is purely economical for now, America is mindful of Human Rights, Democracy, Peace, Environment and Good Governance and it’s the reason the Superpower is identifying, nurturing and closely working with young leaders to achieve this.

Hussein Barack Obama, former US President in his second term of office decided organise African Young Leaders Initiative and met with 500 young people and since then through his Yali Program  continues to train and empower African Young Leaders which Kivumbi is a beneficially. Donald J Trump too is not negating this tusk.

Kivumbi most Social Student with a certificate and he equally contested for Guild President); Kivumbi caught Media Eye when he started holding weekly independent Press Conferences in Kampala Hotels and addressed topical issues both local and International. Aljazeera, Ugandan Community Radio in Germany have covered Kivumbi and equally on BBC’s Africa Have Your Say Program, Kivumbi remained the most hosted young fellow.

Kivumbi also Executive Director of Africa 54 a non-Profit Organisation aiming at a “United States of Africa” narrates that he was inspired into politics by Former Lubaga South Member of Parliament and Conservative Party-CP President General John Ken Lukyamuzi-The Man. In 2007 they both traveled the country sensitizing masses on Environment, Federo and Land issues. 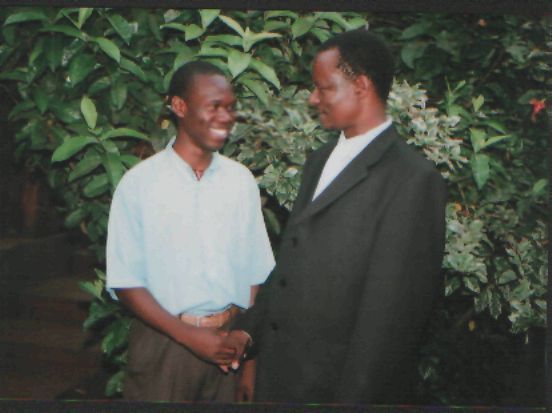 Kivumbi served vocal Lukyamuzi as a special aide until when the 3 time Presidential Contender and People’s Development Party-PDP President General Dr. Abed Bwanika spotted him in 2010, induced him to join PDP. While at PDP Kivumbi served as National Coordinator of the Party and alongside a formidable team they recruited thousands of people for the party nationwide. In the Delegates Conference that PDP hosted in December that year, Kivumbi was elected Deputy Spokesman of the Party and chaired weekly Press Conferences at Tarvan Restaurant on Kampala Rd.

It’s during this time that Kivumbi put business in Kampala on standstill with continuous demonstrations he led until when Uganda Police decided to arrest him alongside 2 party officials while at Parliament with placards challenging Government on several things. Kivumbi who was wearing a blue Nigerian Kijowolo was interrogated for 8 hours and thrown in a dungeon at the Central Police Station-CPS for 3 days until a legal team from PDP demanded that he and other 2 Party officials be produced in court. The media covered Uganda Vs Kivumbi Earnest Benjamin & 2 others 2010 a famous case that lasted 6 months when the Chief Magistrate at Buganda Road Court dismissed it on grounds that Government lacked facts and evidence in the prosecution.

The order was in respect of Kivumbi appearing late at one time during the trial.

In 2011 Kivumbi won the party flag for Kampala Central Parliamentary seat (www.sunrise.ug/news/top-stories/479-21-year-old-for-mp-kampala-central.html ) where he contested with Hon Muhammad Nsereko Zaake, former Presidential Aspirant Mohammad Kibirige Mayanja and DP’s Eddy Yawe yet in all TV debates, Kivumbi’s articulation was far beyond his opponents which worried blue eyed Nsereko to strike a political deal with Kivumbi that saw him meet the Lion of Africa 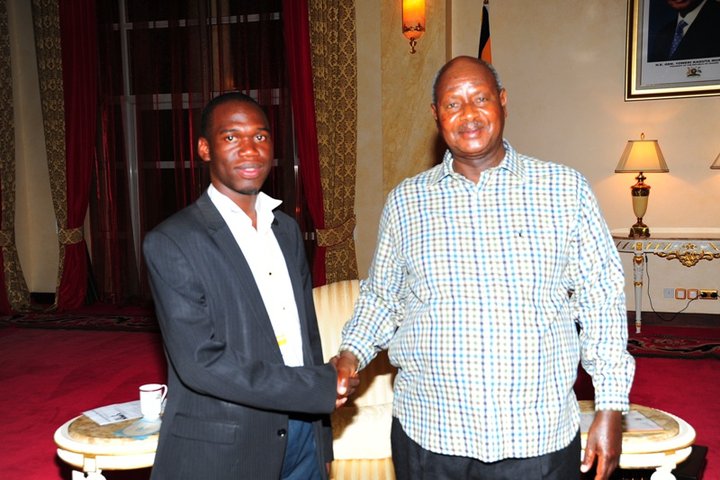 H.E Gen Dr. Yoweri Kaguta Museveni at State House Entebbe. Sources indicate that Kivumbi sat with Museveni for 4 hours from 1:00am alone in a living room sharing with him most importantly the African Dream that Libya’s Col Mwamar Minyer El Bin Gadaffi was pursuing. 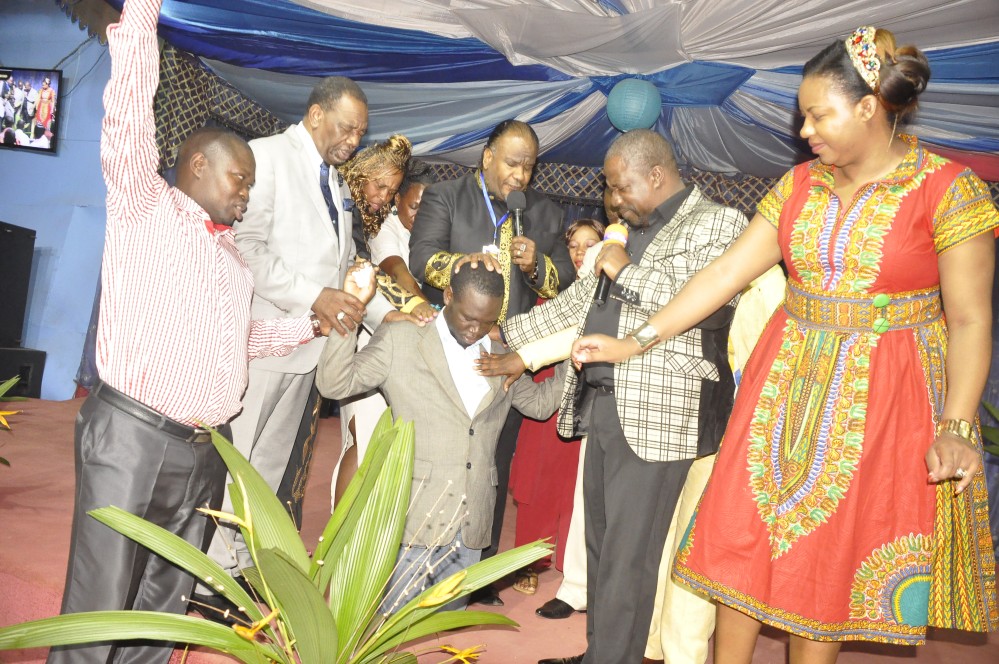 Kivumbi is a Born Again Christian and a preacher who started preaching from High School; he was a Student Pastor at both Angel High School Namasuba & DK Hill School where he pastored the biggest scripture Union Fellowship in Central Uganda. He used to invited the likes of Pastor Wilson Bugembe and many renown preachers to talk to students. While at DK, Kivumbi also served as a Head Prefect aswell as holding several positions right from Nursery in the different schools attended including being time keeper, Head Boy, Chairman Debating Clubs among others. 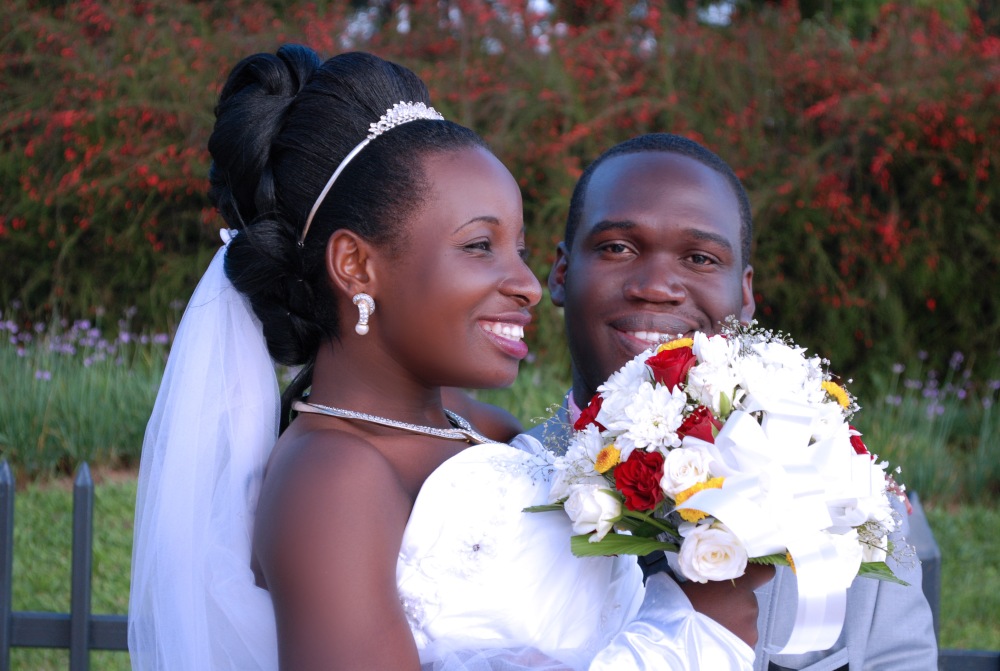 Kivumbi is married to Princess Scovia Kivumbi, 24 who is an IT personnel and worship leader at Redeemed Church Masajja of Ps David Bweyinda & Nakafeero Zelubel where Kivumbi goes. 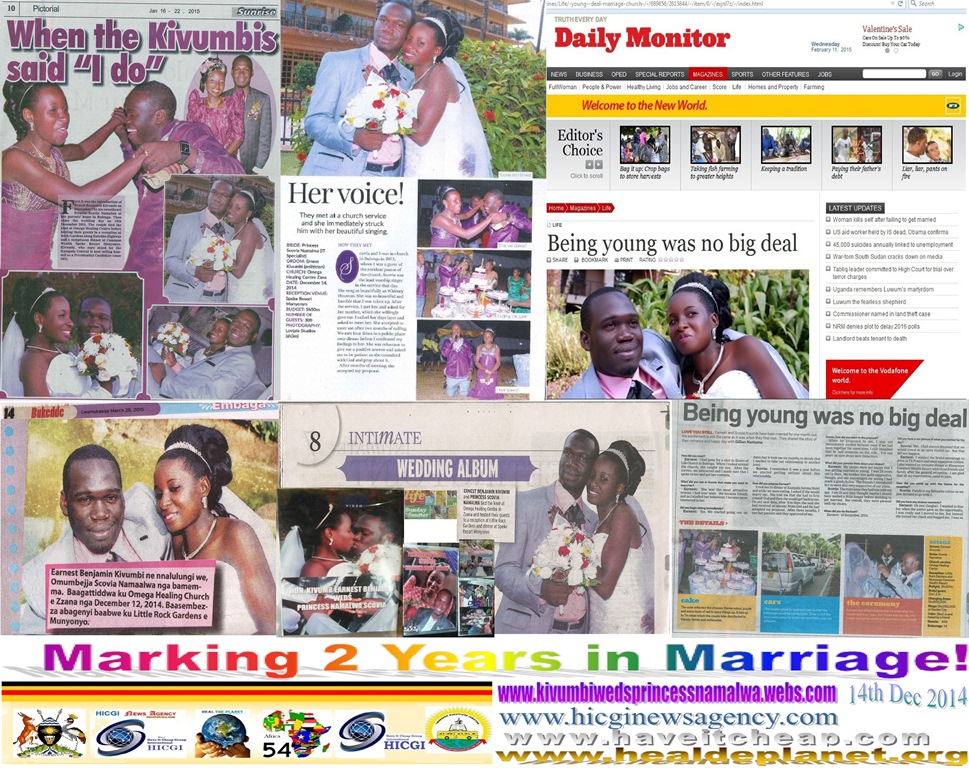 He has volunteered with a number of Organizations such as Youth Alive Uganda (Makerere University), Good Samaritan Ministries, Tohender, Sr. Amedeo Charity Society, TERREWODE and worked as a Primary School Teacher Before in Tumutende Nursery & Primary School as well as Radio Presenter for Health Talk shows on Vendor’s Voice & Namirembe FM. He has also worked as Enrollment Officer for National Security Identification System-NSIS based in Kampala Central.

Kivumbi has authored several books including Fagil Mandy An Incredible Icon and currently working on publication of Assassination of the Icon, Dreams From My Father Col Minyer El Bin Gadaffi.

He has met with several big personalities around the world including journalists, Billionaires, Heads of State and others. 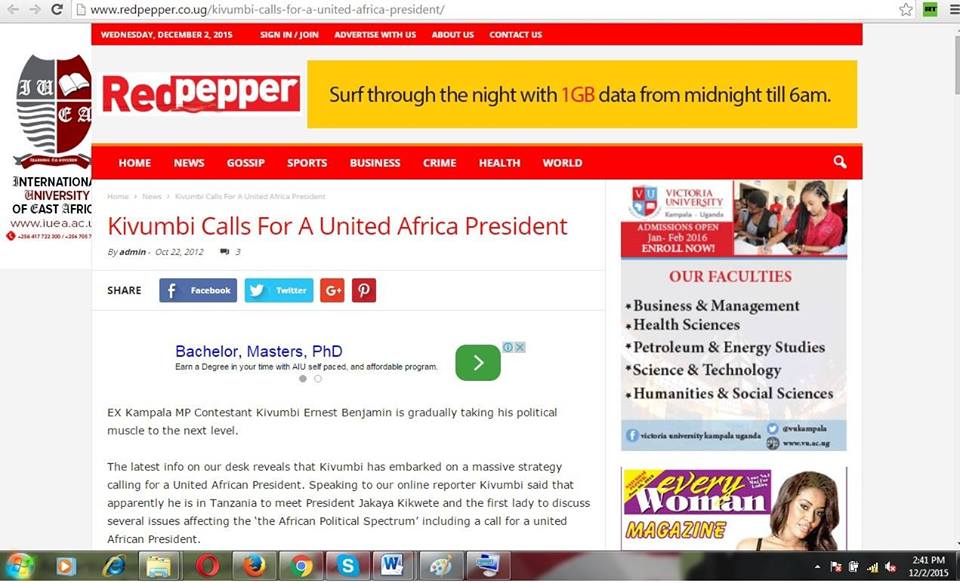 While in Tanzania sometime 2012, Kivumbi Spoke to Uganda’s Mighty Red pepper and announced his African Dream. 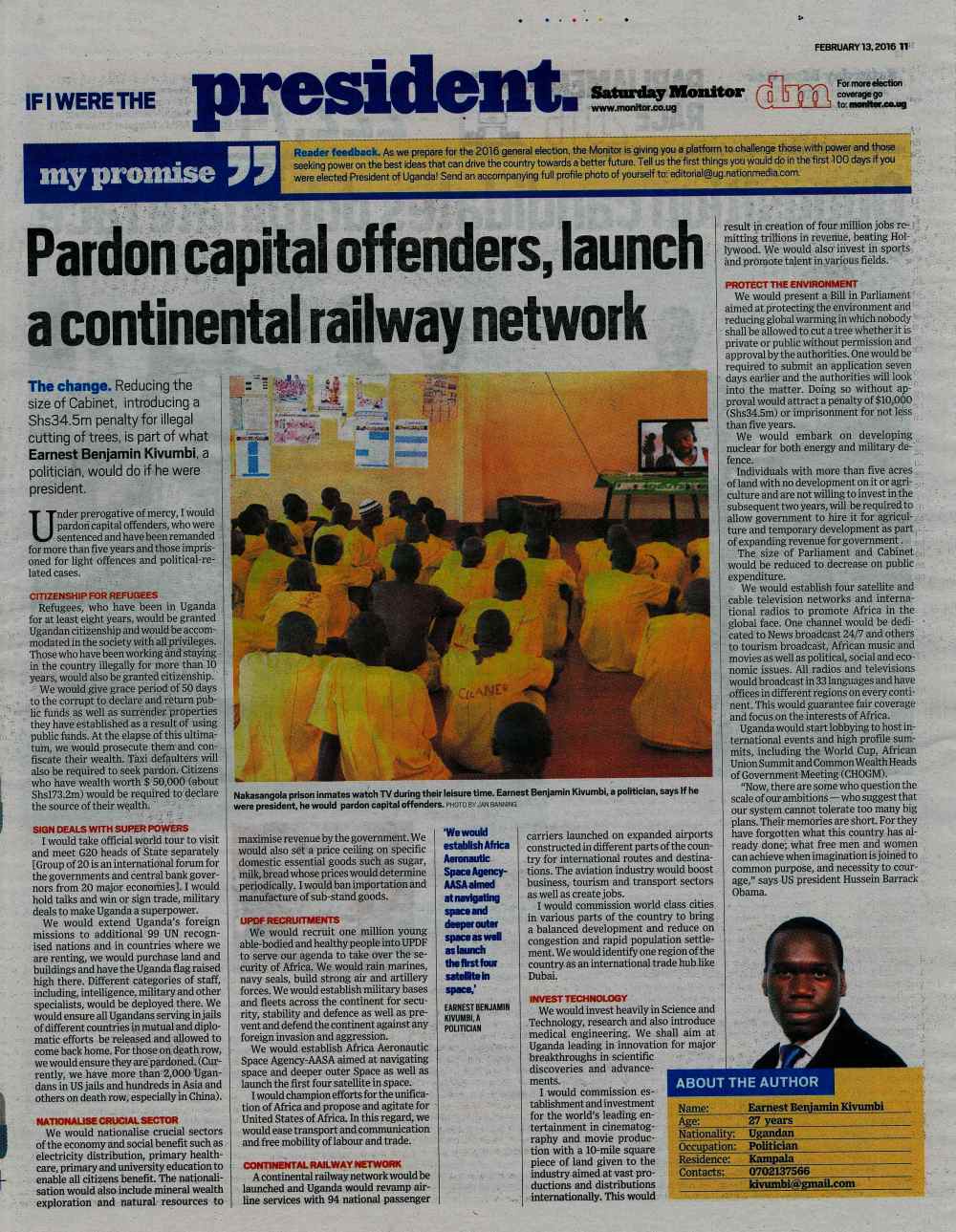 Image of Twitter Feed for US Embassy Following Kivumbi. 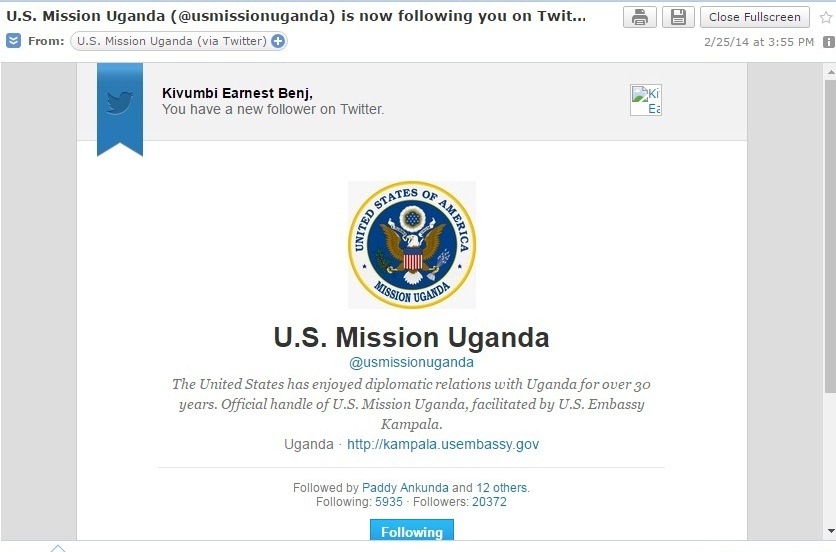 HICGI News Agency can reveal-it’s not only America eying Kivumbi but also its allies including European Union-E.U which has had communication with him. Officials also from Heal The Planet Global Organisation-HTP have disclosed that United Nations has grunted Special Status for the Organisation which allows HTP now to seat and speak in UN Conventions and Sessions in New York, Vienna & Geneva.

History has always stressed luck as the number one thing and equally so the Baganda say that Akaliba akendo o’kalabila ku mukonda literally meaning that what will be great is reflected by its appearance. All powerful people in the world have met incredible people at the time there rising in key positions and only God can always make a way for them even at a point of impossibility. 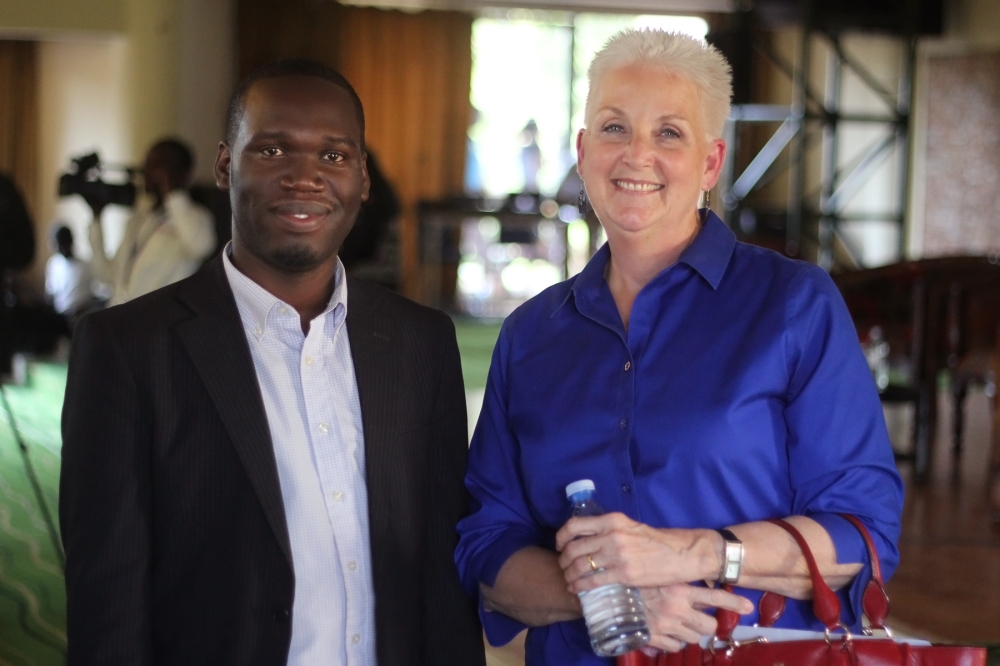 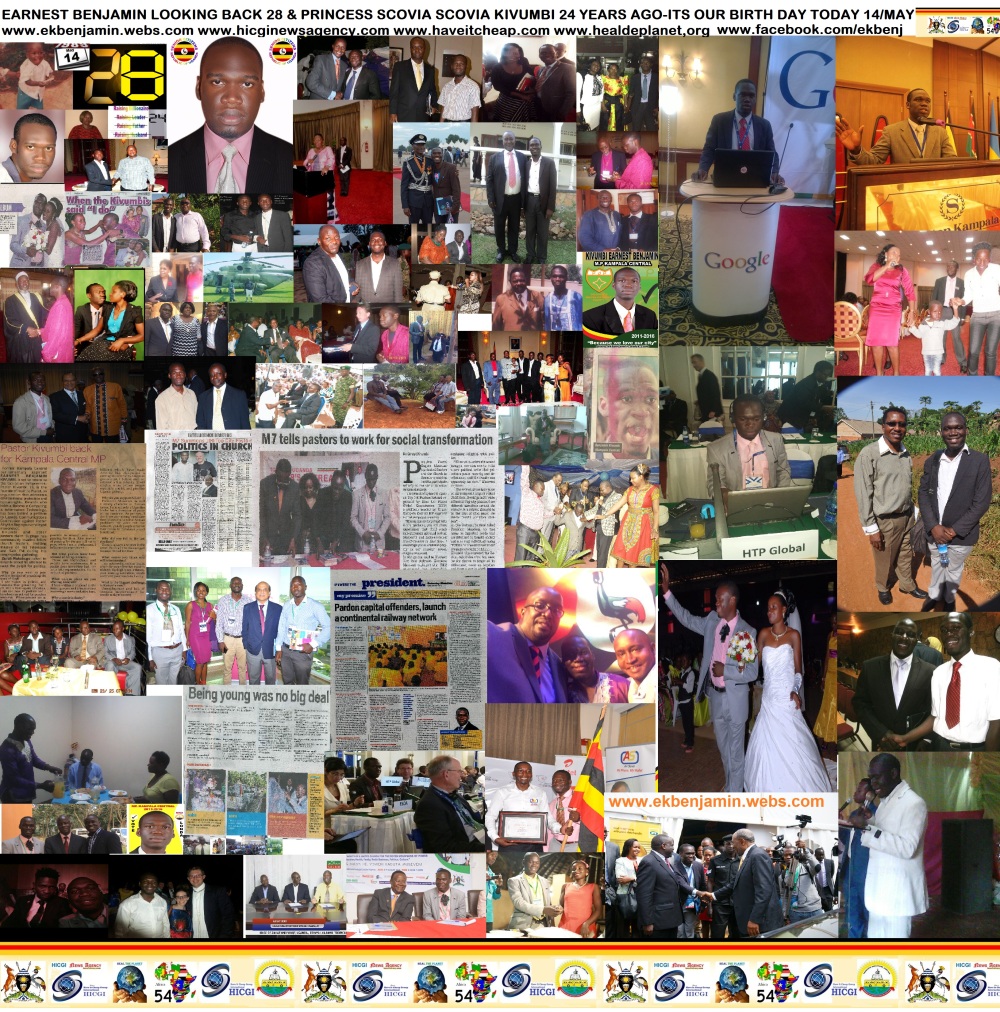 Photo Montage of Kivumbi with VIP’s on his website www.presidentkivumbi.wordpress.com when he was celebrating 28 years and his with Scovia 24 on 14 May 2017.