Jerusalem – Israeli warplanes continued to pound Gaza on Tuesday and rocket fire into Israel resumed after a brief lull, as Palestinian protesters hit the streets in cities across the West Bank and elsewhere.Thousands gathered in various towns in the West Bank, including Ramallah and Hebron, on Tuesday after a number of Palestinian groups, including Hamas militants in Gaza and Fatah in the West Bank, called for mass strikes.”The first priority for the Palestinian political leadership now is to have Israel stop its crimes and massacres against our people in Gaza,” Wasel Abu Yousef, a member of the Palestine Liberation Organization’s (PLO) Executive Committee in Ramallah, told journalists on Tuesday.

Israel imposed a partial closure on the West Bank on Tuesday, an Israeli security source said, with only men older than 45 and Palestinian construction workers with work permits allowed to enter Israel. 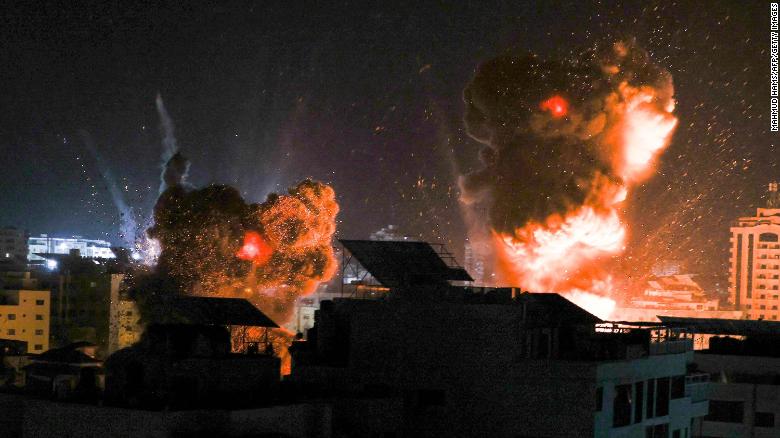 Israeli airstrikes continued through the night into Tuesday. The Israel Defense Forces said warplanes had struck nine rocket launch sites in Gaza on Tuesday in addition to targeting a tunnel system in northern Gaza, several residences of Hamas commanders and an anti-tank squad in Gaza City. The Hamas-run Gaza Ministry of Health said 213 people, including 61 children, had been killed and 1,400 others injured in the current round of violence. More than 2,500 Palestinians are now without homes and more than 38,000 are considered internally displaced, according to the United Nations.Israel briefly allowed trucks carrying international aid into Gaza for the first time since the conflict began last week, but Israeli authorities halted the entrance of aid trucks in response to mortar fire at two border cross crossings.

Monday night and early Tuesday morning had brought a brief respite in southern Israel from militants’ rockets. The Israel Defense Forces did not report any warning sirens overnight, the first time in a week Israel went a night without rocket fire from Gaza.The attacks resumed later Tuesday, with one mortar killing two civilians at an agricultural packaging factory on the Israeli side of the Gaza border, bringing the total number of dead in Israel to 12 since violence erupted just over a week ago. Sirens also sounded once again Tuesday in Ashkelon and other towns, sending residents fleeing again into shelters. 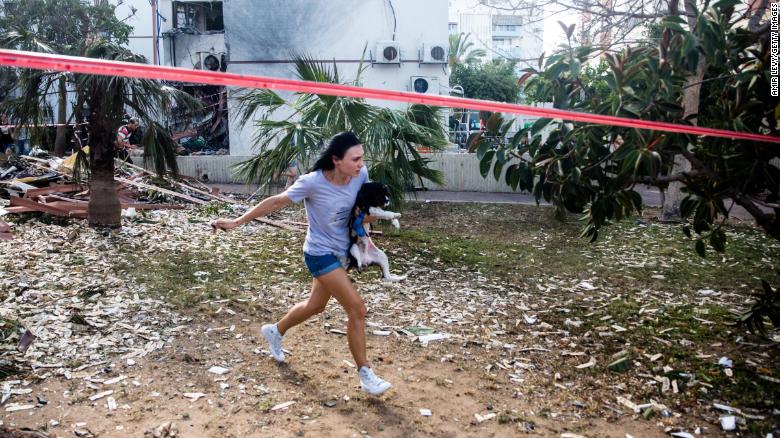 A woman runs for a shelter in Ashdod, Israel, after sirens warned of rockets fired from Gaza on Monday.

Now into its eighth day, this is the deadliest Israeli-Palestinian confrontation since the two sides fought a war in 2014. Speaking Tuesday following a visit to the Israeli air force base at Hatzerim, Prime Minister Benjamin Netanyahu said operations would continue “as necessary to restore peace to the citizens of Israel.”Referring to Israel’s attacks on Hamas and Islamic Jihad, Netanyahu said: “I have no doubt that we took them back many years.””I’m sure all our enemies around see what price we’re charging for the aggression against us, and I’m sure they’ll learn the lesson too,” he added.Around dawn, the IDF destroyed an office building near Gaza.

An advance warning was given that the tower would be targeted, witnesses said, and there were no reports of casualties. Israel has not commented on the incident.The destroyed building was among several pieces of infrastructure used by civilians that have been targeted by the IDF. Israel has repeatedly accused Hamas of “deliberately” operating near buildings like hospitals and schools, thereby endangering civilians who risk becoming human shieldsOver the weekend, Israeli forces destroyed a building housing offices for international media outlets Al Jazeera and The Associated Press, claiming it contained Hamas military intelligence assets. Hamas has denied that allegation.Dozens of Israeli jets bombed more than 9 miles (14 km) of Hamas’ tunnel system in Gaza Sunday night into Monday morning and targeted 14 residences Monday that the Israeli military said belonged to commanders from the Palestinian militant group.

Hamas authorities and video from the ground showed a health clinic in Gaza City damaged by an Israeli airstrike on a nearby target, its windows blown out. The Ministry of Health in Gaza said the clinic was one of its main coronavirus testing centers.The ministry earlier warned the destruction of medical facilities could lead to a surge of Covid-19 cases because those fleeing to shelters would be “exposed to the spread of infectious diseases, especially the danger of spread of the coronavirus.”A spokesperson for the IDF told CNN on Tuesday that it targeted the main operations center of the Hamas internal security forces in the Rimal neighborhood, and that the building was close to the clinic.

As Israel continued to trade airstrikes with rockets fired from Gaza on Tuesday, protests took place in a number of cities.Thousands raised the Palestinian flag and chanted in support of Gaza at a rally in the West Bank city of Ramallah. Some of the protesters burned tires and there were some clashes with Israeli forces near a checkpoint, said Dr. Mustafa Barghouti, president of ​the Palestinian National Initiative, who attended the demonstration.Thousands of women and children also took part in a demonstration in Al-Bireh, north of Ramallah. Some protesters were heard chanting, “One hand is planting collaborators, another hand is planting freedom, cover the martyrs with flags, no peace, and no surrender.”One 30-year-old protester in Al-Bireh said they would take “to the streets until we can put an end to the humiliation and indignity that we have to live through.”At another protest in east Jerusalem, George Zeidan, co-founder of Right to Movement Palestine, complained about the restrictions “on our movement as we’re crossing and going between family, going to school, going to work, going for a run, going for a party.”

“Whatever we’re doing we’re always faced by oppression by the Israeli army,” he added.”Just like in apartheid South Africa, this has to end,” demonstrator Tawfeek Haddad said. “Palestinians will not be second-class citizens or kicked out of their place.”Israel’s government has previously rejected that comparison. In April, the country’s Ministry of Foreign Affairs described a report by Human Rights Watch as “preposterous and false” after it accused the Israeli government of committing crimes of apartheid. A 25-year-old Palestinian was killed, and two Israeli soldiers were wounded in an altercation in Ramallah, according to health authorities in the West Bank and the IDF. The IDF said it responded to incoming live rounds at its position which resulted in two soldiers getting wounded in the legs.

Attempts to negotiate a truce between Israel and militants in Gaza has so far proven difficult.German Chancellor Angela Merkel spoke with Jordanian King Abdullah II on Tuesday; both leaders supported efforts to reach a ceasefire, according to Merkel’s spokesperson.US President Joe Biden voiced support for a ceasefire Monday during a telephone call with Netanyahu and “discussed US engagement with Egypt and other partners towards that end,” a White House description of the call read.

Biden ‘expressed his support for a ceasefire’ in call with Israeli Prime Minister, White House saysEgypt and Qatar’s efforts to broker a truce have stalled over two main points, a senior Hamas leader with direct knowledge of mediation efforts said on Sunday. One stumbling block is Israel’s insistence that Hamas must initiate the ceasefire, at least three hours before Israel, at which point Israel would follow. Hamas flatly rejected this proposal, the Hamas leader said.The Hamas source said the other hurdle is Hamas’ insistence that any ceasefire must include the ending of Israel’s “provocations” at the Al Aqsa Mosque in Jerusalem — the third holiest site in Islam — and a resolution of the situation in Sheikh Jarrah, an East Jerusalem neighborhood where several Palestinian families face eviction.

A pro-Jewish settler organization called Nahalat Shimon is using a 1970 law to argue the owners of the land in question before 1948 were Jewish families, and so the current Palestinian landowners should be evicted and their properties given to Israeli Jews.Palestinians say restitution laws in Israel are unfair because they have no legal means to reclaim property they lost to Jewish families in the late 1940s in what became the state of Israel.

A Ugandan local Pastor, Joseph Sserwadda on Sunday during his weekly radio talk show, described the Israel- Palestine conflict as a “Battle of gods”